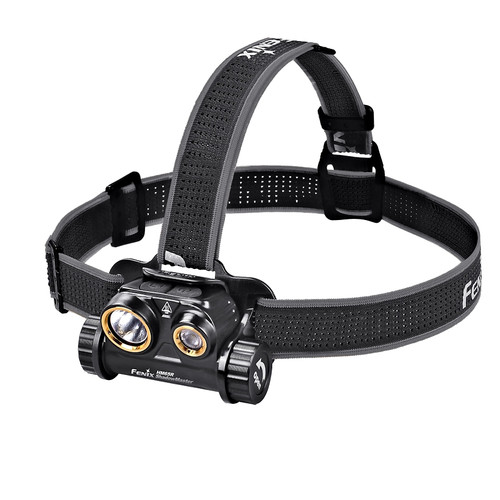 The Fenix HM65R ShadowMaster headlamp has a maximum output of 1200 lumens from the SST40 white LED and is powered by an included 18650 li-ion battery. A variation on the popular Fenix HM65R, the ShadowMaster version has been designed for the UK market.

Instead of the spot and flood LEDs on the original HM65R, the ShadowMaster features a Cree XP-E2 red floodlight LED in addition to the main high power LED. The combination of white and red light makes the head torch ideal for fishing, hunting and military applications. Other differences to the original HM65R include upgraded non-dimming power electronics and a stealth black headband.

The headlamp has five levels of white light and four levels of red, all of which are operated by a dual switch user interface on top of the light. The red light switch turns on and cycles through the red modes and the white light switches on and cycles through the white modes. Between the buttons sits a battery level indicator which is activated by single pressing either switch when the light is off.

The HM65R ShadowMaster comes with a Fenix 3500mAh 18650 battery and a USB Type-C charging cable which plugs directly into the unit to rechargeable the cell.

Maximum beam distance 168 meter white light and 30 meters red light. Waterproof to IP68 and resistant to impacts up to 2 meters.

HTO Tip and Butt Protector, up to 10′ rods, Black